Awarded by the Australian Renewable Energy Agency (ARENA), the funding supports projects that aim to reduce the cost of solar by three quarters of the current price.

The collective goal of the latest round of ARENA grants is to increase solar efficiency from 27% to 30%, and reduce the installed cost from $1.20 per watt to 30 cents per watt, all by 2030.

The project will build on a decade of singlet fission research by Professor Schmidt in a bid to exceed the absolute efficiency limit of silicon solar cells while maintaining low manufacturing costs.

They will be joined on the project by Exciton Science members Professor Dane McCamey, Dr Phoebe Pearce and Associate Professor Jon Beves.

Exciton Science Associate Investigator Anita Ho-Baillie of the University of Sydney was awarded AU$2.78 million to work with renewable technology company SunDrive on the commercialization of perovskite-silicon cells.

This project will focus on stacking perovskite on top of silicon to form a tandem solar cell, rather than using silicon on its own.

“The idea of this stacking is to convert more energy from the sun to electrical power,” said Professor Ho-Baillie.

“The efficiency that can be achieved by a perovskite-silicon tandem in a laboratory is now over 30 percent, while the highest efficiency for a silicon cell on its own is just below 27 percent in the laboratory and around 23 percent commercially.

“There isn’t much room for silicon to improve because its theoretical limit is only 30 percent – but for perovskite-silicon tandem, it is 40 percent.”

To read more, go to: https://arena.gov.au/blog/solar-research-funding-to-drive-costs-lower/ 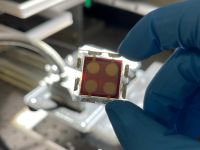